This week we are giving science a break and heading to the movies in honor of the Flagstaff Mountain Film Festival, an epic event that has taken place in our region since 2003. 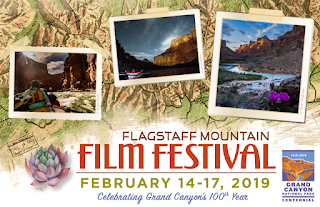 We explore some of the famous films that were shot around the canyons and buttes, rivers and towns of the Colorado Plateau, and also spotlight some of the future filmmakers of our region. Students at the Star School, an off the grid elementary/middle school in northern Arizona write, direct and produce their own short films on everything from alternative power to storytelling and traditional practices.

Our wonderful guests this week are Dr. John Tveten, the Executive Director of the Mountain Film Festival who also once hosted a couple of spectacular radio shows out of Hopi on KUYI, Amy Martin a documentary photographer who uses her camera's lens to increase awareness, understanding and compassion across physical and social barriers, and John 'Verm' Sherman a bouldering pioneer, creator of the bouldering V-scale, and a spectacular wildlife photographer who uses his photography to spread awareness on the plight of the endangered California Condor.

John 'Verm' Sherman Photography
Posted by This is the Colorado Plateau: Science, Research and News