Plateau on the Radio: Episode 10 Volunteering for Wildlife and the Landscape

Episode 10 of This is the Colorado Plateau is up and running friends (and you can listen live to future episodes at 10AM MST streaming worldwide on www.radiosunnyside.org, and in Flagstaff, AZ on 101.5 FM). We talked with Inka Knittle, one of the amazing organizers of the Grand Falls Clean-Up Event happening on April 6th and 7th out at Grand Falls on the Diné Nation, and also we are bringing you dear listeners opportunities on how you can get involved with volunteer activities this Spring on the Plateau, including the great adventure in spotlighting for Black-footed Ferrets out on the southern edge of the Plateau in April. 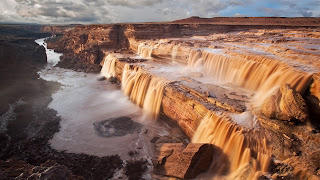 Plateau on the Radio: Episode 9 Indigenous Perspective on Bears Ears

Listen to this weeks episode HERE.
This week we are focusing on the indigenous perspective surrounding Bears Ears National Monument by sharing the Heritage Voices podcast that recorded the thoughts of four amazing people. The panel consisted of Lyle Balenquah (Hopi Archaeologist), Regina Lopez-Whiteskunk (Education Coordinator for the Ute Indian Museum), Ed Kabotie (Hopi/Tewa artist and musician) and Angelo Baca (Diné/Hopi, Filmmaker and Cultural Resources Coordinator for Utah Diné Bikeyah). Tune in to hear their experiences with Bears Ears, and also thoughts on larger issues such as indigenous and Western science collaborations, and tribal sovereignty. Thanks to the great folks at Living Heritage Anthropology, the Friends of Cedar Mesa and the Archaeology Podcast Network for making this happen.


Posted by This is the Colorado Plateau: Science, Research and News

Plateau on the Radio: Episode 8 Cave Ecology of the Plateau

Listen here: Plateau on the Radio - Episode 8 Cave Ecology of the Plateau
This weeks episode will find us not on the Plateau, but deep within it, as we explore cave ecology and biology with Ecologist and NAU Research Professor Jut Wynne. Also we have a segment on the late Stephen Hawking, Notes from the Field featuring the land swap news from the Hopi Nation, a new Audio Postcard from the Plateau, and a couple of songs of course...

For more on the work of our guest Jut Wynne check out:
https://www.scientificamerican.com/author/jut-wynne/
https://www.researchgate.net/profile/Jut_Wynne 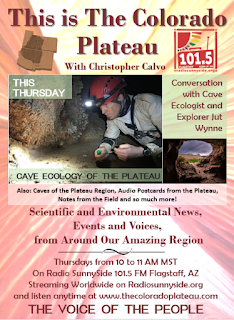 Cave Life of the Colorado Plateau 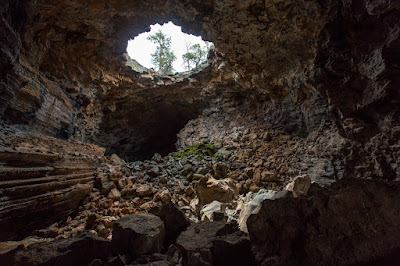 In El Maipais National Monument on the New Mexico portion of the Colorado Plateau is a special place in too many ways to really count. The name El Malpais is from the Spanish term Malpaís, meaning badlands, and it is called that due to the extremely barren and dramatic volcanic field that covers so much of this rugged area.

The cinder cones, lava flows, and other volcanic elements of El Malpais are part of the Zuni-Bandera volcanic field, the second largest volcanic field in the Basin and Range Province. This volcanically active area on the southeast margin of the Colorado Plateau is at the intersection of the Rio Grande Rift Basin, with its deep normal faulting, and the ancient Jemez Lineament. These two features provide the crustal weaknesses that recent magmatic intrusions and Cenozoic volcanism are attributed to.

The smooth Pahoehoe and rugged A'a' lava flows of the Zuni-Bandera eruptions filled a large basin between the high mesas of the Acoma Pueblo to the east, Mt. Taylor to the north, and the Zuni Mountain anticline to the northwest.

And anywhere there is volcanic activity like this, there are also numerous lava tube caves, like the amazing Big Skylight Cave, where a special habitat exists beneath the light of one of the ceiling entrances. And within this habitat are some amazing lifeforms indeed.

Cave Ecologist and Research Professor Jut Wynne and colleagues discovered an new species of millipede living within this delicate and unique ecosystem. Named Austrotyla awishoshola n. sp. after a local Zuni term awisho(moss) and shola(many-legged creature). This millipede may have become restricted to the cave environment following the end of the Pleistocene, and is a spectacular example of how a species can exist solely in one specialized spot.

For more on this species and other cave life information for the southwest, check out the great links below:

Plateau on the Radio: Episode 7 Katie Lee and Glen Canyon

On this episode of your humble regional science show we focus in on the life of an amazing woman and her fight to help restore the place she lost beneath the murky waters of Lake Powell. And of course we are talking about Katie Lee and Glen Canyon. Join us as we explore Glen Canyon before and after the Glen Canyon Dam was built, and here the voice and songs of Katie Lee. You can listen to this weeks episode right here.


Posted by This is the Colorado Plateau: Science, Research and News

Plateau on the Radio: Episode 6 Pluto and Our Dark Skies

This show highlights the importance of dark skies on the Plateau as well as focuses in on the biggest discovery to ever happen in the Plateau region...the planet Pluto. Our amazing guest Kevin Schindler is the historian at Lowell Observatory and has a new book out titled 'Pluto and Lowell Observatory', so join us as we leave the Plateau for a little while and blast off into space.

Give a listen to it right here...

And you can pick up Kevin's new book at Lowell Observatory in Flagstaff, AZ (all proceeds from book sales goes straight to Lowell Observatory) and also attend the unveiling of the newly restored Pluto Discovery Telescope up at Lowell on March 10th from 3-5 pm. 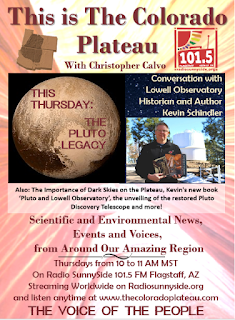